Is your chimney not working correctly? Have you “tried everything” and nothing seems to help? Perhaps the problem lies in your Chimney Physics! At first, this might sound complicated. But really it isn’t.

As a ICS Certified Chimney Sweep, we can evaluate your chimney and recommend any corrective action to ensure that it is capable of the proper draft and flow.

Here are some simple scientific fundamentals to explain how and why a chimney works – or maybe why it doesn’t.

Your House as a System

Even though you can’t see it, the air in your house is constantly in motion. In general, airflow tries to flow out of your house in the upper parts and make up air tries to flow into your house in the lower parts of your house. Thinking of your house as a system makes it easy to understand the reasons for that airflow. The actual flow of air into and out of any home is influenced by a number of constantly changing factors, including: stack effect; wind loading; interior mechanical systems and fuel-burning appliances such as furnaces, fireplaces, wood stoves and water heaters.Homes built in the past 25 years, and older homes that have been retrofitted, have been made more and more airtight. This makes it much more difficult for makeup air to enter the home.

As the saying goes, “hot air rises”, and so does the warm air in your home. When the warm air rises to the upper areas it’s called the stack effect. That trapped air creates a pressurized area and forces its way out – through even very small openings such as light fixtures and window frames. At the same time replacement air is trying to enter in the lower part of the building to makeup for the escaping air.

Somewhere in your house, amid all this airflow, is something called the Neutral Pressure Plane (NPP). Above this theoretical plane, the air pressure is slightly positive compared to the outdoor air pressure and is trying to force its way out of the house. Below the plane, it is slightly negative and the house is trying to draw air in. The location of the NPP can constantly change in response to changing conditions.

All of the factors that affect airflow in the house also influence the level of the Neutral Pressure Plane. Anytime a fireplace or fuel-fired heating appliance (except direct vent) is below the plane, air will tend to flow into the house through the chimney or vent. A common example of this is found in homes with two fireplaces, one below the other. As the upper level fireplace uses air for combustion and chimney flow, it depressurizes that level slightly causing air to flow upwards from the lower level. Since the lower level fireplace is below the NPP, it draws air into the basement through the chimney. Unfortunately, since those two flues generally exit the chimney close to each other, the makeup air can contain some smoke from the fireplace above and it can pick up unpleasant chimney odors as it passes down the chimney flue. 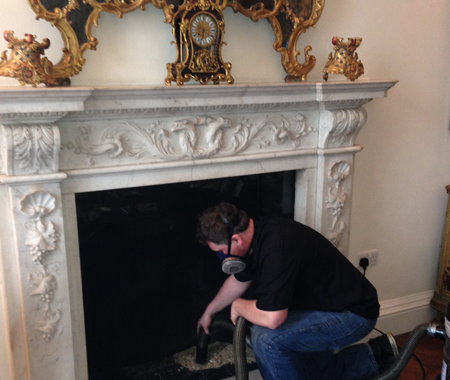